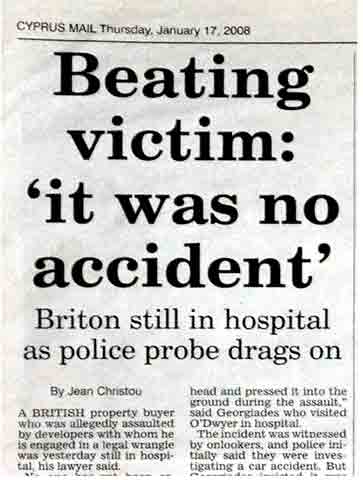 A BRITISH property buyer who was allegedly assaulted by developers with whom he is engaged in a legal wrangle was yesterday still in hospital, his lawyer said.

No one has yet been arrested for the alleged assault, according to Yiannos Georgiades, the lawyer for Briton Conor O’Dwyer who has been in Larnaca hospital since Monday.

“I spoke with the police but the investigation is not done yet, and they haven’t arrested anyone,” said Georgiades.

“He is still in hospital and although physically he is better, he is terrified over what happened to him.”

O’Dwyer, 38, who has widely publicised his case on youtube and on the website lyingbuilder.com, was kicked in the kidneys and had his head stomped on, according to Georgiades.

O’Dwyer had already pressed charges over another alleged beating by the father and son developers in March 2006 while fighting his ongoing property case at court. They were later charged over the assault.

On Monday at around 11am, O’Dwyer went to the disputed property in Frenaros in the Famagusta district to take pictures of changes to the area around the house to produce as evidence in the land wrangle because he thought the photos might prove important later.

However Georigiades said the woman to whom the developers re-sold the house after unilaterally cancelling O’Dwyer’s contract and keeping £75,000 of his money, “made a phone call” and two men appeared shortly afterwards that O’Dwyer identified as the developers.

“He was telling me how one of them put his foot on his head and pressed it into the ground during the assault,” said Georgiades who visited O’Dwyer in hospital.

The incident was witnessed by onlookers, and police initially said they were investigating a car accident. But Georgiades insisted it was no accident.

An eyewitness contacted the Cyprus Mail yesterday and said it had been an accident, that two vehicles had collided and that O’Dwyer, and the two men in the other car had become embroiled in a scuffle. The eyewitness refused to give his name however.

But Geogiades said it had not been a mere incident over bumping vehicles. He said the two men had grabbed at O’Dwyer when they realised he was wearing a hidden camera. The camera has not been seen since but O’Dwyer saw it in the hands of his alleged attackers when they stood later talking to the police, Georgiades said.

“The start of the incident was captured on the hidden camera but then someone shouted ‘camera’ and they spotted the wire,” he said.

He said O’Dwyer had told the police after the incident that one of the men was holding his camera but there was a lot of confusion and it wasn’t confiscated from the man by the police.
“I am really disgusted with the way things happened,” said Georgiades. “I want to believe they (the police) will do something.”

The lawyer said one of the police who was called to the scene had also given a statement to the effect that the developers had allegedly called them initially to go and remove O’Dwyer from the area and if they did not, he would go himself to remove him from in front of the house.

O’Dwyer is due to be released from hospital today.