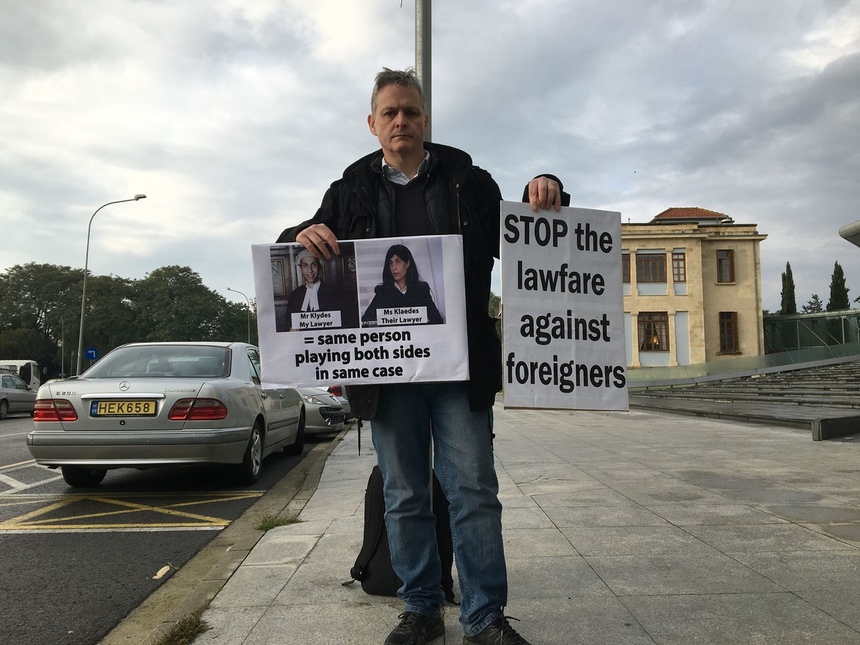 JUST 16 working days after the Supreme Court heard British man Conor O’Dwyer’s appeal against the 2012 ruling of the case filed by property development company Christoforos Karayiannas and Son Ltd in 2006, he was in Court this morning to hear from the judge that his appeal had been rejected.

Given the complexity of the case and the volume of evidence to be reviewed, which dates back over more than a decade, it was considered that it would take the judge much longer to arrive at a decision. The judicial system in Cyprus is notoriously slow.

During this morning’s brief court hearing the judge delivered the verdict and handed the 35-page judgement to Mr O’Dwyer’s lawyer; the full judgement was not read to those present in court.

Mr O’Dwyer will continue his fight for justice and plans to take his case to the European Court of Human Rights (ECHR).

I spoke with Mr O’Dwyer’s lawyer, Yiannos Georgiades, for his thoughts on the ruling of the Supreme Court. He said that he was very disappointed with the handling of the case; he believes there are grounds for proceeding with the ECHR for the infringements of Conor’s right to a fair trial and his right to freedom of speech. (These rights are guaranteed by Article 6 and Article 10 of the European Convention on Human Rights.)

The people who are clearly in the wrong have been rewarded for their wrong-doings. They were convicted of assault (twice) but haven’t gone to prison, despite selling his house unlawfully they’ve been allowed to keep Conor’s money. But the court failed to compensate Conor the full amount because they awarded the other side damages of €60,000 by penalising him for defamation because he dared to call the wrong-doers ‘liars’ and ‘crooks’ on his website.

It’s appalling. It’s as if they were rewarding the wrong-doers!

Mr Georgiades explained the ECHR has ruled that consumers should be free to express their opinion and complain about the way they’ve been treated by a company, even if they use strong and insulting words. The right to protect one’s reputation gives way to one’s right to free of speech as it’s in the public interest for an individual to freely express their opinion about the way they’ve been treated.

What message is this giving to people who come to our country to buy property or invest? If they’re unlucky enough to have a dispute, it will drag on for 14 years – and if they dare to complain about what’s happened to them, they will run the risk of being penalised and end up paying a fortune to the people who wronged them!

See the original article on the Cyprus Property News for comments from the expat community.