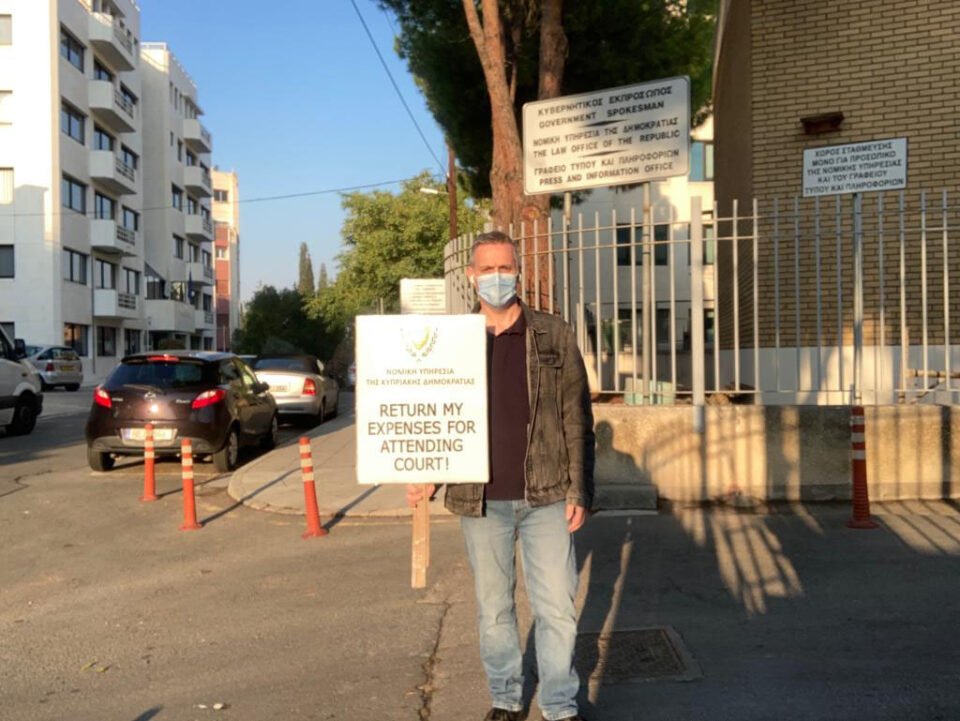 A British man who has been involved in a long and exhausting property dispute in Cyprus that lasted over 15 years, was arrested on Monday outside the attorney-general’s office in Nicosia, but was later released without charge.

Armed with a megaphone, Conor O’Dwyer was protesting the court’s failure to compensate him for the expenses he accumulated over the years when he was the witness and victim in an assault case brought against two developers in 2008.

According to O’Dwyer’s lawyer, Yiannos Georgiades, O’Dwyer was only offered €1,000 as compensation for his numerous journeys to Cyprus from the UK at the time. He also had to pay for his own accommodation, as well as his family’s.

“Conor has been protesting for days outside the Attorney-general’s office,” Georgiades told Cyprus Mail. “Today, he decided to step up his protest and moved to the main entrance of the building when police intervened and placed him under arrest, officially for blocking the attorney-general’s main entrance.”

Georgiades, who believes the arrest was a warning sign sent by the authorities, said O’Dwyer’s reasons to protest are absolutely justified.

“He spent thousands of euros travelling back and forth to Cyprus, as he had to appear in court several times. He eventually won the assault case, but nevertheless he was never properly compensated,” the attorney said.

Georgiades said he was also informed that the police are investigating O’Dwyer for allegedly mocking the Supreme Court in 2019, when he was protesting outside the premises holding a placard reading “Kangaroo Court”.

Back in February, the Supreme Court rejected O’Dwyer’s defamation appeal. He had appealed the case filed by developer Christoforos Karayiannas and Son Ltd accusing him of breach of contract and of defamation.

The Supreme Court also reaffirmed the initial €60,000 in damages to the company, a national record, for calling the developers ‘liars’ on his blog.

He was then forced to rent a flat in London and undergo a lengthy legal battle with the developers.

Georgiades said O’Dwyer has no intention of stopping his fight for justice and confirmed that last week he filed a case against Cyprus in the European Court of Human Rights (ECHR).